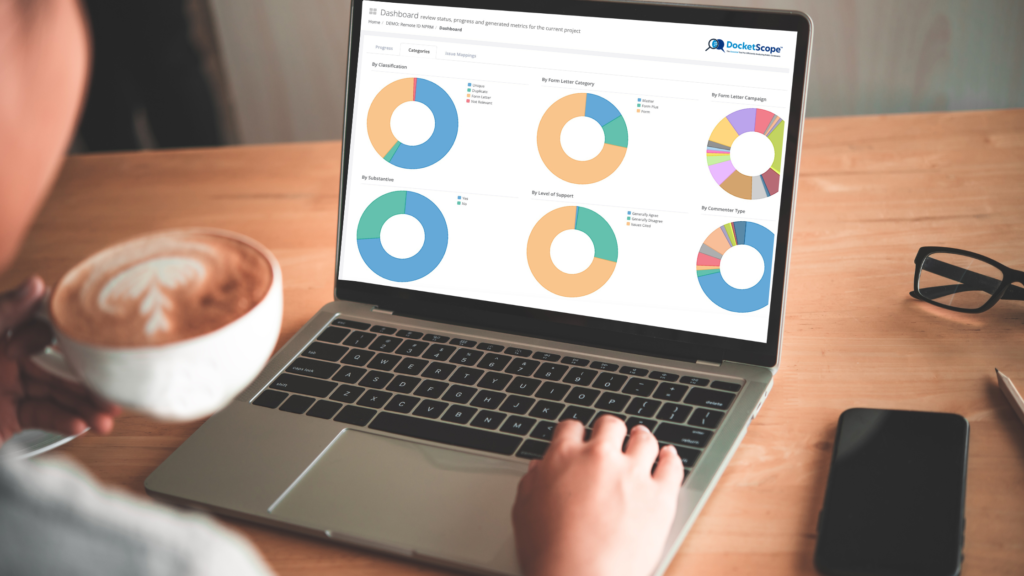 Getting through large numbers of identical or nearly identical public comments can be time-consuming and challenging for analysts and project managers – especially when a regulatory action attracts significant public attention. Project teams reviewing public comments, particularly teams facing these high-profile actions with thousands of similar comments, need strategies and tools to deal with them quickly and efficiently.

For this reason, it’s best practice to analyze only the first comment in a series of duplicates, review subsequent comments only to confirm they’re identical, and label them as duplicates. Project teams can speed the process further with DocketScope software, which automatically pre-identifies duplicate comments so analysts can quickly confirm they’re equivalent and move on to other substantive comments.

Unlike duplicate comments, form letters are the same or similar comments submitted by multiple commenters. These are not necessarily identical. For example, a commenter might add a sentence or paragraph to a form letter. Because of this variation, it can be more complicated and time-consuming to identify and analyze these submissions. Because agencies are only required to respond to the significant issues raised by commenters rather than respond to each individual commenter, to speed up the review process and avoid repetition in reporting documents, project teams can start with the master form letter; generally, the first one received, and identify the significant issues it raises, then review other comments based on that form letter only to determine if commenters have introduced additional significant issues.

Handling form letters is easiest if the team can identify them before analysts begin the review. Then the project manager can assign comments from the same form letter campaign to a single analyst who can review them together, significantly improving efficiency. DocketScope’s clustering software automatically identifies likely form letter comments, so teams spend less time determining which comments are form letters and quickly move forward with analysis.

Sometimes, the agency may receive submissions from several different form letter campaigns, especially when public interest in the action is high. It can be challenging for analysts to track them all and identify which form letters belong to which campaign. An analyst can save time by having digital copies of the master form letters readily available to match up form letters and campaigns quickly. And DocketScope’s clustering software saves even more time and effort by automatically indicating which campaign a form letter comment likely belongs to.

Having grouped form letters by campaigns, project teams need to review each submission for supplemental information. For example, commenters may have added an introduction explaining their background or slightly rephrased the form letter’s text. Since these additions don’t introduce new significant issues, they don’t have to be addressed in reporting documents.

However, suppose commenters have included additional substantive information. In that case, the submissions should be marked as “form plus” comments, and analysts should review the distinctive sections for any significant issues not in the master form letter. The distinct sections can be particularly difficult to find because they could be added anywhere in a form letter and may need to be more obvious at first glance. To help address the challenge, DocketScope’s software identifies not only similar comments but also highlights unique sections not common to other form letters in the same campaign. As a result, analysts quickly zero in on amended sections and any significant issues they may include.

Designed by experts in rulemaking and comment analysis, DocketScope addresses the specific needs of comment review teams by reducing the effort and time it takes to categorize submissions and catalog the relevant issues. With the help of DocketScope and the best practices outlined above, teams can produce comprehensive reporting documents on schedule and within budget – even for high-profile rulemakings that attract multiple form letter campaigns consisting of thousands, tens of thousands, or even hundreds of thousands of very similar submissions.